You are here: Home / Video / Nordic Walking: The Dork Factor 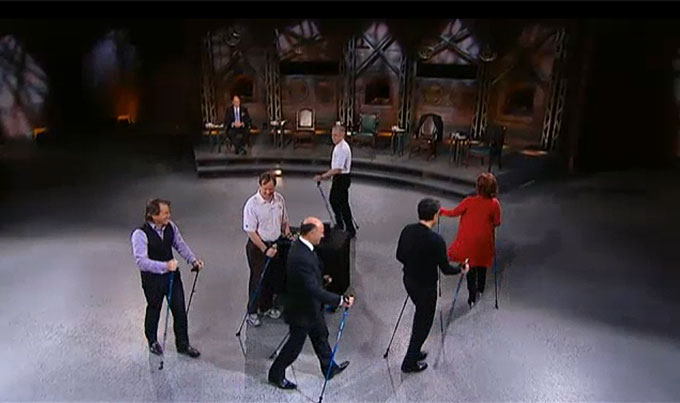 This Nordic walking clip was the very first thing I found on the web when looking for Nordic walking information, in which Klaus Schwanbeck & Greg Bellamy of nordixx Canada pitch their idea for new Nordic walking poles to a panel of potential backers. ((“Dragons’ Den” is a TV show in Canada where people try to get funding for their business ideas.)) One of the backers, Kevin O’Leary, calls a spade a spade and says bluntly, “You look like a dork, walking around with these poles.”

And suddenly a word I hadn’t heard in maybe 20 years was back in my life! Dork! But you can Google “nordic walking” and “dork”, and you will get hits dating back years now!

When Klaus and Greg first Nordic walk out on the stage, the panel members can’t stop themselves from laughing. That’s exactly the reaction you’ll get sometimes in real life, too. Even grown men seeing someone Nordic walking for the first time will grin, and then have an uncontrollable urge to giggle.

I don’t mind it anymore; I laugh along with them. In fact, if I’m passing them on the sidewalk and see that they’re trying to hold back from laughing, I’ll give them a quick grin which usually sets them off.

American Nordic walking enthusiast Marek Zalewski freely acknowledges the dork factor, but points out that dork doesn’t necessarily mean dumb: “I am able to provide a non-scientific profile of a typical US Nordic walker. He, or she is usually well-educated. Most of my customers and students have advanced university degrees. Is often well-travelled. Has tried all kinds of sports and fitness activities, including skiing – both Alpine and cross-country, sailing, hiking, running, walking.” ((Zalewski, Marek.  Nordic Walking- the Dork Factor? 11 December 2006. Retrieved March 2014 from http://www.nordicwalkingus.com/nordic-walking-the-dork-factor/))

Another American walking enthusiast, Mark Fenton, says, “It looks dorky, which is the biggest drawback to people jumping on the latest fitness craze. People think they’ll look goofy walking along….. It will appeal to people who like to be one of the first to try something new, who actually don’t mind looking weird in public.” ((A Nordic walk on the wild side:  It looks dorky, admits American walking guru Mark Fenton. National Post. 2 March 2006. Retrieved March 2014 from http://www.canada.com/story_print.html?id=89935e65-52ff-4b6a-b0ff-6e2594819dad&sponsor=)) 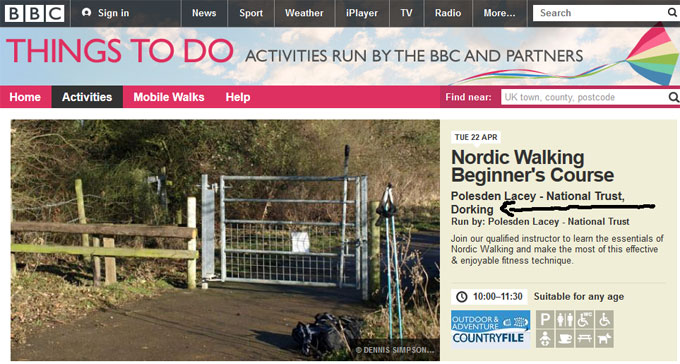 Norking in Dorking…. almost too funny to be true.

One of the founders of Nordic walking, Marko Kantaneva, writes, “The basics of Nordic walking have not changed since spring 1997. In those days, a person walking with poles, accompanied with amused mockery, had to sneak in shame to seek shelter in woods…. When Nordic walking was still taking its first steps, it was called ‘dementia walking’ in Finland because people thought that those who practised it had forgotten their skis at home. Moreover, Nordic walking was considered clearly as foolish nonsense.” ((Kantaneva, Marko. “Sauvakävely – Nordic walking.” Gummerus Oy 2005. ISBN 951-20-6785-4. Retrieved October 2013 from http://www.onwf.org/originalnordicwalkingbookeng/173))

Blogger Jenny Matlock writes that rather than laughing at her, she’s had people say “bless” to her, thinking that she’s blind. (( Matlock, Jenny.  Walking with Nordic Walking Sticks… Blog post 11 June 2010. Retrieved March 2014 from http://jennymatlock.blogspot.ca/2010/06/walking-with-nordic-walking-sticks.html))

How to get over the Nordic walking dork factor 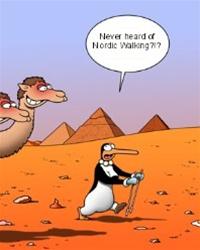 Notice I didn’t say how to make the dork factor go away — but how to get over it.

After a few weeks, you’ll be chomping at the bit to maybe go out at times that are convenient for you even if there might be more people about — and eventually away you go.

You’re in the vanguard of this new sport that will become so commonplace in North America that people won’t even give you a second look and there will be picture jokes on Facebook and Pinterest about the fad.

In the meantime, just tell yourself, you’re not a dork, you’re a nork!

Anyone else have to face down the dork factor when getting started with their norking?