You are here: Home / About / Nordic Walking and Dog Attacks

There is a fair bit of information about how to take your dogs out along with you when you go out Nordic walking. There are special short Nordic poles with wheels you buy for them (just kidding.)

However, there is very little out there about what to do when you are out Nordic walking and someone else’s dog attacks you.

I grew up with dogs from day dot and love dogs and they love me. I never had a single problem run-in with dogs in my entire life, even when out all the time over decades of jogging, biking and power walking, until I started Nordic walking and then was attacked twice by two different dogs in the same week.

I was convinced that it had something to do with the poles, because I know it’s not me from my personal experience.  I Googled, and as I say, I found very little on the topic, but found one or two people surmising that with Nordic walking sticks, you could confuse some dogs and seem like  animals with 4 legs to them. (( Thread started by Sheri Ahmet, Bridport. Dogs and walking poles?  http://www.go4awalk.com/the-bunkhouse/your-walking-stories/your-stories.php?story=21534 ))

“Dogs may try to attack the poles. I’m not sure why, but little dogs often get ticked off with them and bark and growl quite a bit.” (( Matlock, Jenny.  Walking with Nordic Walking Sticks… Blog post 11 June 2010. Retrieved March 2014 from http://jennymatlock.blogspot.ca/2010/06/walking-with-nordic-walking-sticks.html ))

It could be as well because dogs don’t see as well in the dark, they could get confused and think they are seeing something with four legs and decide to attack it. When they reach you, they’re confused because they are seeing a person, but they have already gone into the full attack arousal zone that it is hard to get them out of.

I guess the fact of the matter is that some very poorly trained and controlled dogs will chase and attack Nordic walkers just the same as they would regular walkers, joggers, bikers or cars — the added factor of the poles may just provoke some dogs that would otherwise not bother. Yes, it is the owner’s fault not the animals, but the other fact of the matter is that being attacked and bitten by a vicious animal is not a topic to be an arm-chair philosopher about.  Being bitten hurts a hell of a lot, but it’s not just about the immediate pain but also the associated health risks.

Should you do the obvious and use the poles as a weapon?

I think it’s important to address the obvious: as Nordic walkers, we are not defenceless. We are equipped with a weapon that a jogger or power walker would give their eye teeth for in the same circumstances. Our poles. Our metal poles. With sharp spikes at the end.

Blogger Jenny Matlock, in pondering a dog Nordic walking attack, writes, “The good thing, though, is that you at least have a weapon to hit the little pole-hating dog with. Last week there was actually a dog that got off his leash and after it finished snapping at the poles a few times I thought it was going to try and rip my ankle off. The owner was doing nothing and I thought I was actually going to have to hit the dog so it wouldn’t bite me. (I don’t want to hear … awww, poor dog here. It was a schnauzer. It looked really vicious!) The owner finally got the dog under control and then got quite annoyed with me. He told me, “You should be ashamed scaring my dog with your poles like that.” Ummm. OK. Yea. I actually briefly toyed with the idea of hitting him with one of them.”

Jenny was clearly partly joking, but the reason I quote her is that I think we’d all be in 100% agreement with her. We would not want to injure a dog. But.

Probably the very last thing we want to do is start beating the dog with the sticks, though I suppose if we must, we must. You do have a right to defend life and limb against animals. But, think about the next step. Of course the owner will start attacking YOU to protect his or her dog, and it may all end up with police, lawyers, charges and lawsuits even though it’s completely the dog owner who would be at fault.

So we want alternatives to try to make this all go away  with as little stress as possible for you.

Defending yourself against dog attacks while Nordic walking

Some of these ideas are how to defuse the situation; some of them are how to attack back. You want to try to defuse first, of course.

Also bear in mind there is no one single method for fending off a resisting dog attack that is always foolproof and always legal in every country.

This is just a collection of ideas, which I am not supporting or negating, for you to ponder in your circumstances. I can of course accept no responsibility for any of them as I am not even sure what to do myself in the future.

What I am going to try going forward

I have purchased a Dog Dazer II (I’m not sure if ever there was a Dog Dazer I or not.) Some people are confused by the name and think it’s a laser. Let me tell you, if they have even banned pepper spray in Canada they sure in heck aren’t gonna be allowing us no laser guns. The name is as in daze, to daze the dog. It’s a high-pitched sort of whistle thing.

I can’t tell you if it works on attacking dogs yet, thankfully. And with luck, maybe I will never be able to tell you.

I have tested it though on friendly dogs. Just kinda sneaked and pointed at them when they were sleeping or minding their own business. (Same way as they sneak farts under my desk when I’m working away and minding my own business; payback’s a bitch, eh?) The dogs truly are confused. In fact, I’d say more than that — befuddled, dopey, in a daze like they are drunk, looking around trying to figure out what in tarnation for several minutes afterward. You have to encourage them to snap out of it. So that’s a good sign.

If I have my hand strapped to a pole, I’m not sure how quickly I will be able to extricate the dazzer from my pocket. I probably should practise that, or wear it clipped to my belt using the clip provided on the back.

Here are some photos, showing the box it comes in, the front where the sound comes out of, and the clip on the back. 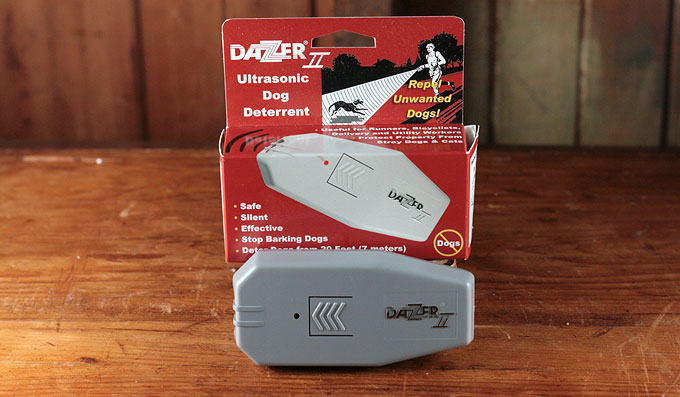 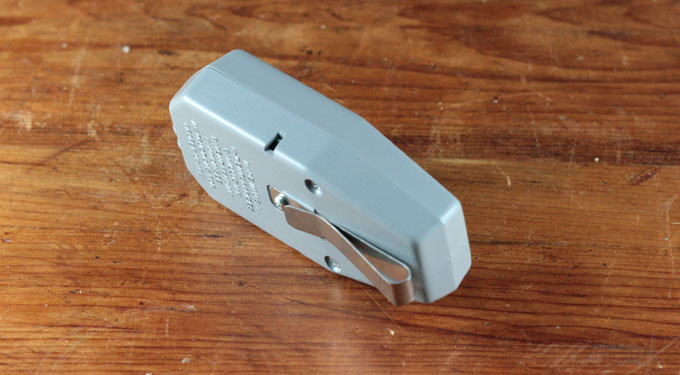 Dog Dazer: Clip on back 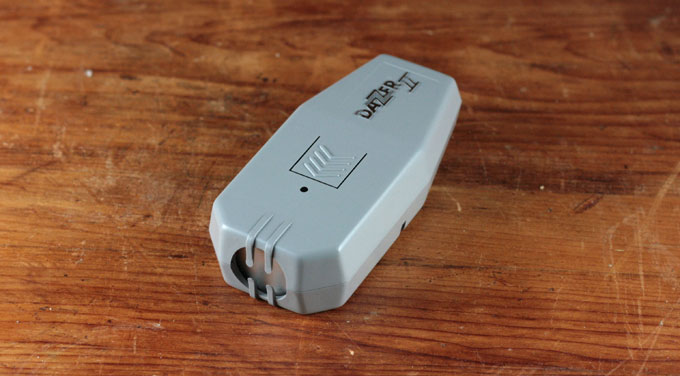 I’m hoping that it will be effective a good deal of the time. It seems like a non-violent way to de-escalate a confrontation with an uncontrolled dog without having to resort to beating it (or the stupid owner) with the poles.

Bumgardner, Wendy. How Do You Stop an Attacking Dog? 15 July 2012. http://walking.about.com/u/ua/dogwalking/How-Do-You-Stop-A-Dog-Attack.htm

Bumgardner, Wendy. How To Avoid a Dog Attack. 21 August 2011. http://walking.about.com/cs/safety/ht/htdogattack.htm

Frawley, Ed.  What would I do if attacked by a dog.  Leerburg Dog Training. Menomonie, WI (Link valid as of March 2014.)

How to Protect Yourself from Dogs While Walking. Retrieved March 2014 from http://www.wikihow.com/Protect-Yourself-from-Dogs-While-Walking