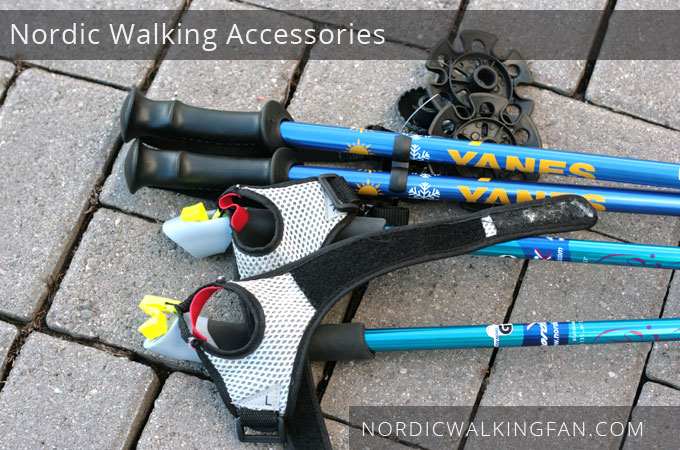 Nordic walking can be a disappointingly affordable sport. Disappointing because, aside from good footwear which you should have anyway, there are very few add-ons that you can buy in your new-found enthusiasm for the sport, forcing you to get out and do the darn sport rather than shop for it.

Many of the accessories are mysterious. Neither of the two makes here came with any “user manual”, not even a small leaflet written in English badly translated from Goblin that might explain what the bits were, when to use them and how to put them together. It was very hard to Google what an item was for when you didn’t know what it was so I just had to suss it out over time.

Now, you won’t have to, because I have. 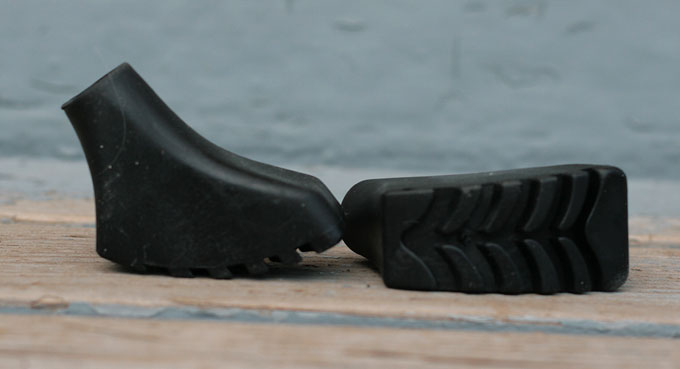 These hard rubber boots go onto / over the hardened metal tips at the end of your poles. While you might look like a dork doing Nordic walking, the purpose of these booties is to prevent you from also sounding like one by muffling the loud “click click click” sound on hard surfaces that the pole ends would otherwise make.

There is more to the rubber booties than that, though. Much more.

Your first pair of booties will almost always come included with your purchase of a set of Nordic walking poles. They will be angled at the bottom. If you got ones that are straight at the bottom, you may have bought trekking poles instead of Nordic poles.

Expect to be needing a supply of booties during your life as a Nordic walker. How often you’ll want new ones depends on how fast you wear them out. I wore out a pair in 6 weeks by doing Nordic walking 90 minutes a day during that time. Nordixx.com kindly sent me a replacement pair on the house and asked me to provide feedback on them. ((There are varying qualities of rubber apparently. Nordixx.com were trialling the replacement pair of booties as a new, better, longer-lasting model.  Perhaps other people were as surprised as I was how quickly the booties had worn out.))

When you order a pair of booties, you’re best, I’d say, to order two or three pair at a time, in order to always have a spare pair on hand. As they wear out and the rubber gets thin, they will be prone to flying off and getting lost. Or, the treads will wear out and your poles will start slipping on wet leaves. Or, one will just suddenly split on you during a vigorous session, or, the bottom of one bootie will be so worn down that the metal tip of that pole will emerge through the bottom and slowly but surely you’ll be walking with the dreaded “click click click” sound.

It’s a very satisfying feeling when you are norking with a brand new pair of booties. 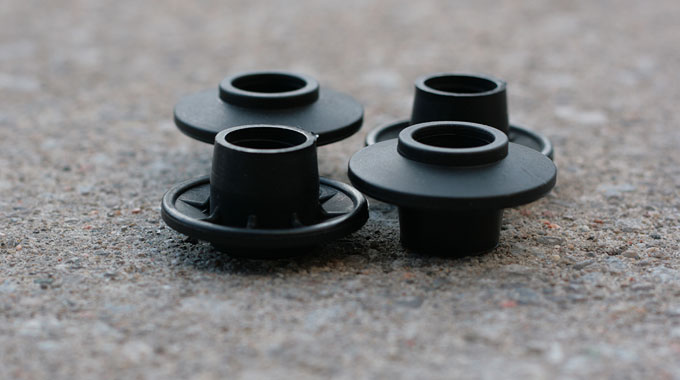 Like the booties, your first pair of performance baskets will almost always come included with your purchase of a set of Nordic walking poles.

I love the name for these, “performance baskets” —  though I’ve also seen them called just plain “baskets.”

You screw them onto (or over, I guess) the ends of your pole; they will ride about 2 to 3 inches (5 to 7 1/2 cm) up the pole from the tip (depending on the make.) There’s room for both the basket and the bootie (or the plain tip) at the end of the pole. This picture below shows both scenarios (tip and booty) better than I could explain.

The performance baskets apparently help you in loose soil, as well as keeping your trekking pole from getting wedged between rocks or tangled in damp grass or debris.

I have to confess I haven’t used my performance baskets yet at all because before writing this, I assumed they were just loose bits of plastic packaging included in the shipping (remember, there wasn’t even a single leaflet explaining what things were for.) I suppose I might as well start using them now; I do have them and they can’t hurt. I’m mostly “on trail” (on the paved fitness trail here along the lake), but occasionally I do take shortcuts across the park fields to avoid scary looking dogs, very young kids weaving around on training bicycles, etc, and the basket might help prevent the pole from sinking into the ground too far — though I can’t remember that happening yet. By preventing the poles from sinking entirely into sand, the performance baskets would almost certainly help a bit if I were to take a shortcut and deek across the sand of the beach here along Lake Ontario  — 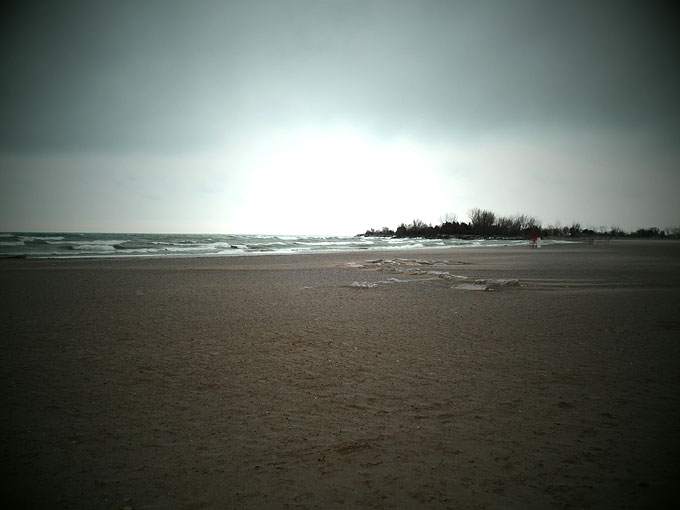 … which I haven’t been mad enough yet to do as cutting across that expanse of sand with Nordic walking poles looks like a LOT of work, would you not agree? 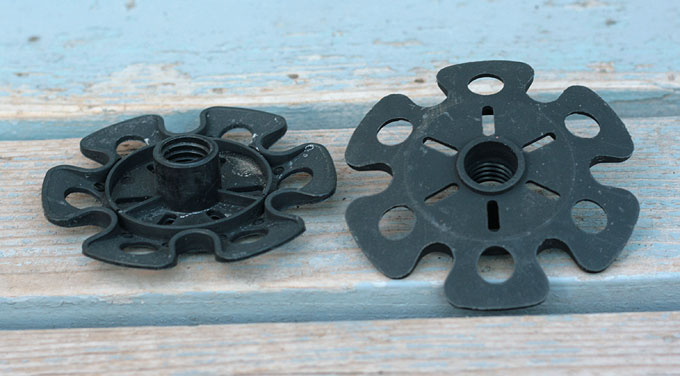 I’ve seen these called  “snow baskets”, or “snow flake baskets.” They come included with some brands of Nordic walking poles; with others they are an optional accessory purchase.

I cover these (and how useful I thought they were) in my post on Nordic winter walking. At any rate, they look kewl; I’d get them if I were you on that basis alone. 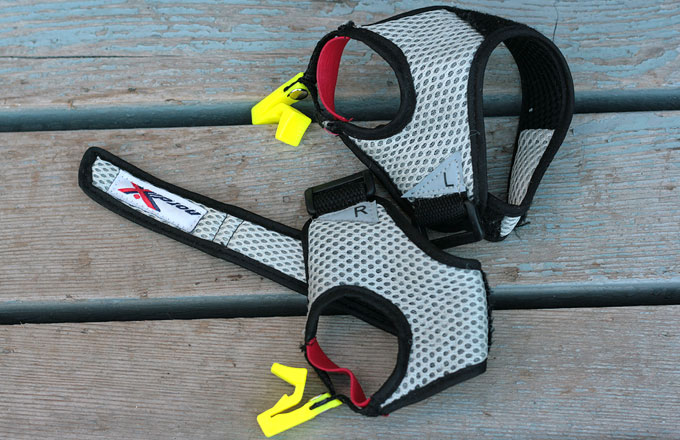 Note that there is a (L)eft one and a (R)ight one, clearly marked because they are not swappable. They seal up with velcro around your wrist in a really unique fashion that you just have to figure out, and have a breathable mesh finish like racing car driver gloves. In short, they are really kewl to have. Granted this is what I started out norking with, so it’s what I know best, but regardless, I would still say the “kewl factor” is high on these. 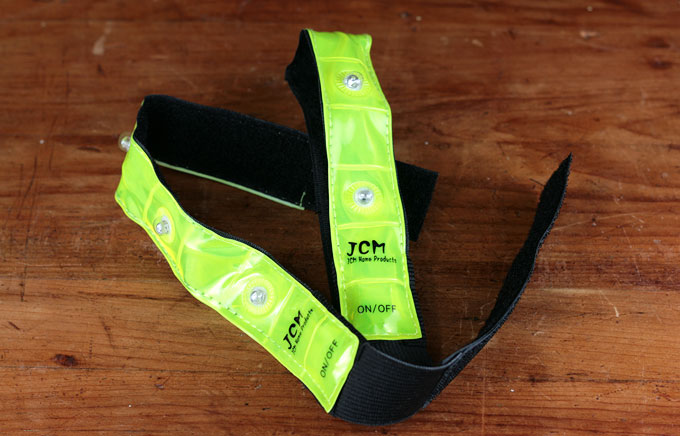 I was a massive jogger in the 1980s, when there was no such concept as “visibility”. (Back then, a car hit you running on the side of the gravel road at night, or didn’t, and you lived, or not. Simpler times.) Then I started my own business and a few decades went by, and now I’m back to being fit. In between a concept called “visibility at night” developed that didn’t exist earlier.

This is something that not all Nordic walking stores don’t seem to talk about or sell you, and they should. Visibility. When you are out norking, you are most vulnerable at that time of day that the French call “la crépescule” and the Québecois call “la brume” (the fog). It’s the time of day when for a few minutes between late afternoon and early dusk, there’s a sort of misty grey fog in the angle of the light and the eye isn’t quite sure of what it sees.

One evening at that exact time of day a woman cyclist who had just passed me on the fitness trail stopped and said, “OMG you know I just veered a bit over from you on a weird instinct;  I would have hit you otherwise because I didn’t actually see you till after; you were so not visible.”  I bow to her. Lesson delivered clearly, politely, no judgement.  So my hunt began on how to be visible.

Boy, visibility can cost a lot, and you wonder, really? It has to cost that much? So I went through a few weeks of being super careful at twilight while I gave myself time to research the topic.

In the end, these bands pictured above were the answer — for me anyway. Two for five bucks. The slim silver batteries in them are replaceable (I hate throwing stuff out.) They didn’t crack in the extreme cold of winter, as I feared they would. Solid light or blinking light. Really versatile — adjust with velcro, strap them over all kinds of areas of your body or ring them through a belt, scarf or a headband.

You’ll look like a dork with them on — but then, remember, they ain’t gonna notice the flashing safety light bands — you’re the one with Nordic walking poles in your hands. 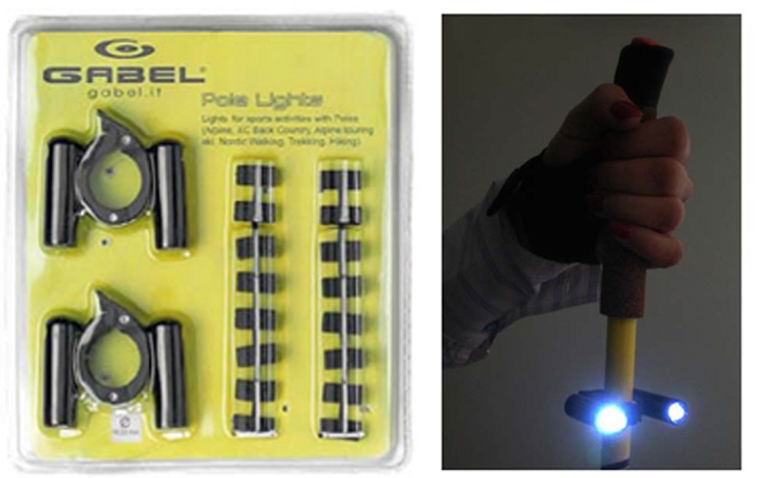 I’ve discovered since that there’s such as thing as Gabel Pole Lights (link valid as of March 2014); with any luck, they or something like them will be available in Canada because they also look KEWL!

There’s also this nifty lil clip-on light gadget for Nordic Walking poles from Leki that I saw on the American Amazon site: