You are here: Home / About / A brief history of Nordic Walking 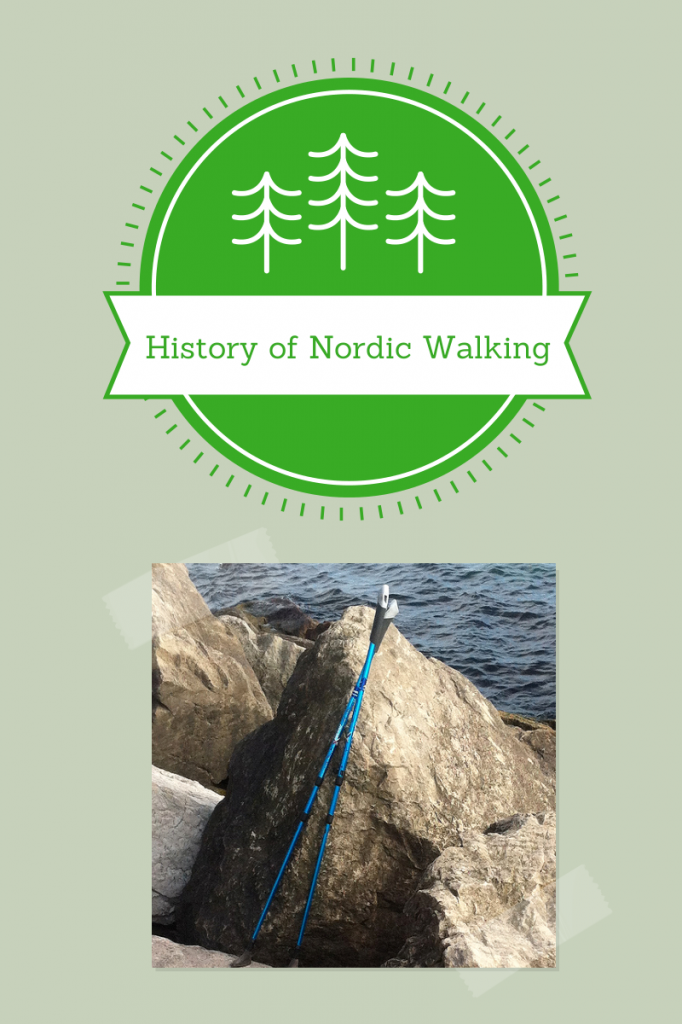 The Brief History of Nordic Walking

A start in Finland

Nordic walking is a modern sport that started in Finland.

For decades in the 1900s, athletes in Finland had been training for winter cross-country skiing by walking in the summers with just the ski poles (they called it “ski-walking.”) And, people had been walking and hiking in the outdoors with sticks.

In 1966, a woman named Leena Jääskeläinen (1939 – ), a gym teacher in Viherlaakso, Helsinki, Finland, started using “walking with ski poles” in physical education sessions for students. Later, as a member of the Physical Education Faculty at the University of Jyväskylä, Finland, she continued promoting exercising with poles. In 1987, she presented her ideas of exercise walking with poles publicly for the first  time at the Finlandia Walk (“Finlandia kävely”) in Tampere, Finland, and her ideas were noticed by the Finnish Central Association for Recreational Sports and Outdoor Activities.

During the same era, a man Mauri Repo (1945-2002) also promoted exercising with ski poles and published a book in 1979 called, “Hiihdon lajiosa” in Finnish (“cross-country skiing training methodic” in English), outlining methods for cross-country ski-training all year round. This book is felt to have influenced the literature and subsequent thinking.

The Finnish Central Association for Recreational Sports and Outdoor Activities, along with the Sports Institute at Vierumaki, Finland, began experimenting with the activity with a view to promoting it.

Nordic as a term was gaining mind consciousness in North America in the 1970s. In 1972, the NHL Hockey Team called the “Quebec Nordiques” was formed.

Later in the 1970s a man named Edward Pauls in Minnesota invented and began selling an indoor cross-country training walking treadmill which he called “Nordic Track.” ((Retrieved October 2013 from http://www.nordictrackreview.com/history/ ))

Both poles were designed for walking exercise, but neither was what is today known as Nordic walking poles.

How much the developers in Finland were aware of the American efforts remains a topic for discussion today. Nordic walking enthusiast David Downer feels that the American developments had more influence than is being openly acknowledged by the Finnish side. ((Downer, David.  Attention Nordic Walking Americans – It’s not Soccer: The History of Nordic Walking. Blog entry 19 November 2007. Retrieved October 2013 from http://nordicwalkingnewsblog.blogspot.ca/2007/11/attention-nordic-walking-americans-its.html ))

The continuing narrative in Finland

In 1994, a university physical education and sports student named Marko Kantaneva began teaching walking with poles at the Sports Institute at Vierumaki, Finland.

In 1996, Tuomo Jantunen, director of the Finnish Central Association for Recreational Sports and Outdoor Activities, along with some others, worked to develop special poles for use with pole exercising. They referred to it as “pole walking” (aka “Sauvakävely” in Finnish, “kävely” meaning “walking”.) One of the people he brought onboard was Marko.

They had an idea they wanted specially developed poles for this activity, so they got a Finnish company called Exel to come to the table and work with them.  Among other things, Exel made cross country skiing equipment. Not only did Exel already have expertise in the general area of making poles, but also, owing to a warming of winters at the time, and a consequent diminishing public interest in winter cross country skiing, Exel was very pleased to develop a new outlet for their ski pole manufacturing expertise.

Over 30 pairs of walking pole prototypes were developed by Exel and tested in conjunction with the fitness institutes. Marko was a key liaison with the company. The tests with athletes immediately showed the benefits of poles in general for heart rate, circulation, leg and upper body muscles, and in April 1997 the two institutes jointly published a brochure outlining their findings to date. They also endorsed their private-sector partner Exel as a maker of the poles.

The poles they came up with had several defining characteristics:

They focussed on promoting the activity first in Finland, as a pilot, to get it established. From the beginning, it was promoted as a health activity. In the fall of 1997, the first television program about the new sport was broadcast. Organized pole walking events were held shortly afterward in response to the interest generated. Shortly afterward, the Finnish Heart Association and the Heli Pulmonary Association began requesting cross-training courses.

When it came time to promote their newly designed poles and the activity for them abroad, the Exel company decided to coin the name, “Nordic walking.” Exel released its first “Nordic Walker” poles in 1997. Exel called the poles “Walker” at first, then later “Nordic Walker.”

“To gain acceptance around the world, the Exel company named the sport “Nordic walking” and the trademark walking poles were changed from “walker” to “Nordic walker”. ‘Even we were surprised how easily the words Nordic and Nordic walking have been accepted in the countries we’ve been importing to. They seem to evoke the associations people have with the north, Nordic countries- fresh air, pure nature, healthy lifestyle. It’s been pretty easy to get those ideas through to people.'” (( (Senior Vice-President, Exel, cited in Sandberg, 2005) — Zurawik, Marta Anna. History of Nordic walking in Finland. Centre for Research for Health and Well-being, University of Bolton. Retrieved October 2013 from www.academia.edu/2969365/History_of_Nordic_walking_in_Finland.))

Outside of Finland, Nordic walking was introduced first to Sweden and Denmark, then to Switzerland, then to Austria and Germany and then to Poland and Slovakia.

Zurawik, Marta Anna. History of Nordic walking in Finland. Centre for Research for Health and Well-being, University of Bolton. Retrieved March 2014 from http://www.academia.edu/2969365/History_of_Nordic_walking_in_Finland.